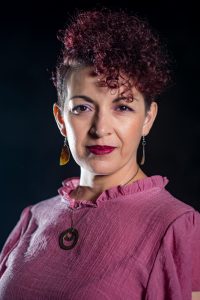 In 2020, Sylvia joined artists across the globe to demonstrate theater’s resilience over a virtual platform and recently worked on her eleventh project Dream Hou$e for Arizona Theatre Co. Her stage direction of Don Carlos: Prince of Asturias was filmed at Company of Angels and streamed for LA Escena, a festival which included artists from Spain, New York, and México City. She wrote, produced, directed, and edited S.H.E.L. Silverstein News, a filmed play connecting 46 participants across 27 households. Miss Most Pressing Issue was staged to give the illusion of being in the same location. Determined to make the Zoom experience engaging, Sylvia explored movement and music within the constraints of physically distanced readings on Concerned Citizen, Los Angeles; Atonement with Abbu; I Kissed Chavela Vargas; Pilar and Paloma; This Bitch and G.I.P.S. Homecoming a live improv show co-directed with Forrest Hartl. In the before times her credits include: The Refugee Hotel (OSF, Ashland), The Long Road Today (South Coast Rep, AD & choreo), Fuenteovejuna, Medea, Mala Hierba, Electricidad, The Vagina Monologues, and Bill’s Shorts. While at UCLA, she organized readings of contemporary Latinx writers and Co-Directed/Produced a Women and Servants with the inaugural LA Escena Hispanic Classic Theater Festival. She was a Future Artistic Leader Mellon Fellow for the 2014 Encuentro at the Los Angeles Theater Center. Currently she is a part-time Professor at Cal State Long Beach where she graduated with her Bachelor’s Degree in Theater Arts and a company member with PlayGround-LA. Sylvia is a proud Mexican-American, first gen MFA artist originally from Bell Gardens, CA.