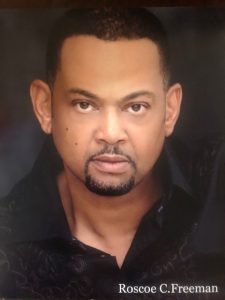 Roscoe has appeared in the Rep Inc. production of Day of Absence, Slow Dance on the Killing Ground, and East of Jordan. Mr. Freeman has also worked with DC Art Works in Home, Ma Rainey, and Piano Lesson. Los Angeles productions include No Place to Be Somebody, The Ninth Wave, Trains, Black Leather Soles, and Nobody Walks Like My Daddy. His work ranges from Gerald on the popular radio soap opera It’s Your World on the Tom Joyner Morning Show to guest roles on UPN’s The Parkers, Fox’s Living Single, and an appearance on the NBC broadcast of Little Richard Story. In his most recent work as Johnny in A Woman’s Worth, the LA Times said “the always solid Roscoe Freeman lights up the stage.”