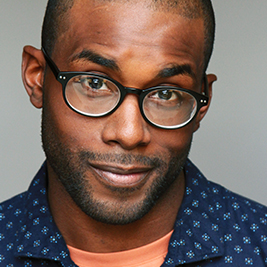 OTHER THEATRES: A midwest native, he has appeared on stages around the Chicago area including Waiting for Lefty with American Blues Theater directed by Kimberly Senior, he is proud to be a part of the award winning ensemble of the 12 hour epic All Our Tragic with the Hypocrites directed by Sean Graney. His face can be seen in video sketches like “IF VALENTINES DAY WERE HONEST” with Buzzfeed and “IMPROVISING” with The Second City Network. Originally from Gary, Indiana he is a recipient of the 2014 Independent Artist Grant from the city of Chicago. His deepest love and gratitude to family, friends, the Chicago community and Columbia College Chicago.