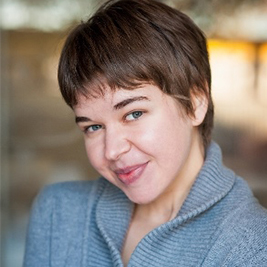 Sophie Goldstein is an LA native who graduated from CSULA with a BA in Theatre Arts and Dance. While at Cal State, she participated in many productions and was an Irene Ryan nominee for her performances in The Cave Dwellers directed by Steve Rothman and Love and Marriage directed by Theresa Larkin. In her last year at Cal State she directed Harold Pinter’s The Lover and was a member of Los Angeles’ site-specific theatre company, Opera Del Espacio. After graduating from CSULA in 2010, she continued to work with Opera Del Espacio and after some time, attended the Acccademia Dell’Arte in Arezzo, Italy where she received her MFA in physical theatre. The training she received allowed her to explore various aspects of physical theatre with two semesters focused on Commedia Dell’Arte. Her final thesis performance was entitled Este Es Un Sombrero and was an exploration of object manipulation in storytelling. She has performed in several productions since returning to LA; most notably, a new work directed by Tanya Kane-Parry (with compositions by Dr. John Kennedy) titled The Wall: A Musical Misdeed based on the short story by Jean Paul Sartre. Other recent credits include a lady’s maid in Lucia di Lammermoor at the LA Opera and Casa0101’s production of Piñata Dreams. At CSULA she has taught Viewpoints, Voice and most recently, Commedia Dell’Arte. She’s also taught at various arts organizations around Los Angeles including Plaza De La Raza, Imagine Arts, and ArtWorx LA. She is still a member of Opera del Espacio and can be found performing with them at various spaces around Los Angeles including the downtown Art Walk.