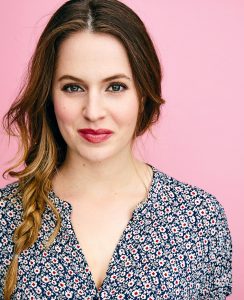 Sarah Mass is an actor and theatre artist who has worked with A Noise Within since moving to Los Angeles in 2019. Previously, Sarah lived in Boston, Massachusetts, where she received her BA in Theatre from Boston College and worked extensively in the Boston theatre community.

Sarah comes from a musical theatre background and is a trained singer, dancer, and musician. She began digging deeper into the craft of acting as a teen and has studied at institutions such as the British American Drama Academy in London, Commonwealth Shakespeare Company in Boston, MA, the University of North Carolina School for The Arts, and more. As an undergraduate student, Sarah realized she wanted her art to make more of a positive impact on the world around her and therefore sought out opportunities to develop her skills as a theatre educator. As a teaching artist, Sarah has worked with ArtworxLA, The Old Globe Theatre, Commonwealth Shakespeare Company, as well as led her own workshops, classes, and after-school programs for students of all ages, from Kindergarten through college.

Sarah’s brand of theatre curriculum is focused around students learning how to tell stories that are important to them. Using methods of devised theatre, Sarah works with her students to generate original content and build an ensemble within the group. Teaching not only techniques in acting, but also directing, playwrighting, and other art forms, she seeks to nurture the whole artist rather than solely the performer. She sees this work with her students as an artistic collaboration and hopes to empower them with the discovery of their own creative voices.

You can find out more about Sarah at sarahallisonmass.com