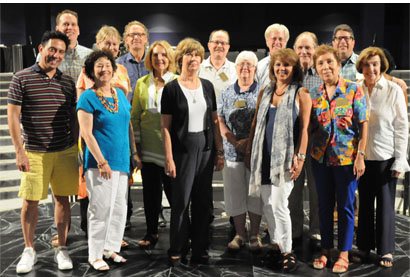 ANW’s Board of Directors. Photo by Anna Rodil.

A Noise Within is fortunate to have an exceptional group of Board Members with diverse backgrounds and expertise, and we are delighted to announce our six newest members.

We are pleased to welcome back two former ANW Board Members: Patsy Paley Neu, an artist and community leader from Beverly Hills, who served on the Board in the late 1990s when the theatre was in Glendale; and Pasadena resident Hon. Lourdes G. Baird who served on the Board from 2006-2011 during the capital campaign and our move to Pasadena. Patsy and Lourdes have watched the theatre grow and thrive over the years, and their history with the organization and insight is invaluable.

Another long-time patron and supporter, David Holtz joined the Board this year after serving on our Audit Committee last year. David is a certified public accountant residing in Northridge and has been subscribing since the 1997-1998 season and is a member of the Insiders, ANW’s literary club. East Pasadena resident Gloria Villalobos Mullendore, who is executive director of Safety Consultant Services, Inc. in Los Angeles and School Ten, Inc. in Orange County, also has a passion for classic theatre—especially Shakespeare—and has been an ANW patron and supporter since our inaugural season in Pasadena.

Our two remaining new members were first introduced to A Noise Within through our extensive education programs. Los Angeles resident Patrick Garcia is the Director of Performing Arts for Monrovia Unified School District, and he worked with ANW’s Classics Live! education program to develop an eight-week residency at Santa Fe Middle School last spring. A former attorney, Lolita Pierce is a writer and home educator living in Arcadia, and her three children have attended ANW’s conservatory classes and our Summer with Shakespeare camp. You may remember seeing her oldest son, Seven, in ANW’s productions of A Christmas Carol and Macbeth; and her youngest son, Vega, will be seen in All My Sons this fall.

All of these individuals have deep connections to A Noise Within, and we are thrilled and honored that they have chosen to serve on our Board of Directors.