ANW’s Board of Directors is an exceptional group of dedicated individuals with various backgrounds and endless expertise and wisdom. We are pleased to announce our four newest members. 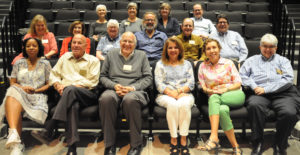 Long-time patron and supporter Jeanie Kay and her husband Terry Kay, ANW Board President from 2003-2014, were also instrumental during the capital campaign and ANW’s move to Pasadena. Jeanie is the Executive Director of the Steinmetz Foundation, which supports literacy programs for K-12 students in Southern California and has supported the theatre for the past 15 years.We are excited to welcome back three-time board member Bob Israel, M.D., a professor in the Department of Obstetrics and Gynecology at the University of Southern California School of Medicine. Dr. Israel has been an avid supporter of ANW since our early days in Glendale and served on the Board during the capital campaign and our move to Pasadena.

Deeply invested in youth education, Dick Roberts coordinated the California state and federally funded after-school programs in the Los Angeles Unified School District. After retiring from LAUSD in 2007, Dick has been active in various in-school and after school reform efforts and is Chairman of the Sally and Dick Roberts Coyote Foundation which supports ANW’s education programs.

Sierra Madre resident Cynthia J. Nunes is the co-founder and Principal of Ictus Consulting, LLC, a Records and Information Management consulting firm founded in 1999 and based in Pasadena, providing services to non-profit, private, and public organizations. Cynthia and her wife, Barbara Nye, have always shared a deep regard for the arts and were pleased to see ANW come to their community.

We are honored that Bob, Jeanie, Dick, and Cynthia have chosen to serve on our Board of Directors and look forward to their contributions!