A NOTE FROM GEOFF & JULIA

Through the ages and from the ashes of troubled times, the human spirit, indomitable and eternal, rises. Yes, we have all been united by particularly strange and trying days of late. And across the globe, along with inevitable chaos and conflict, our better angels are on shining display. Kindness, empathy, a helping hand to a stranger; these are the human qualities A Noise Within chooses to celebrate. Hence our 2020-2021 season theme, Spirits Rising!

First, we bring back Lewis Carroll’s masterwork  Alice in Wonderland. Only a handful of you were given a chance to see this delightful and moving production; and a world turned upside down and inside out (but in this case filled with brilliant language, unforgettable characters, and a lasting wisdom) seems especially timely.

Because our hearts were broken by the prospect of not bringing you this extraordinary spectacle, Alice will be followed by Sweeney Todd: The Demon Barber of Fleet Street, Stephen Sondheim’s preeminent musical thriller. Join our loveable villain as he sings and slashes his way through Victorian England, a journey as hilarious as it is shocking.

The fall wraps up with Radio Golf, the final installment of August Wilson’s 10-play American Century Cycle. This rarely produced treasure embraces the ever-evolving nature of courage and is uniquely bound to Mr. Wilson’s first installment, Gem of the Ocean, produced by A Noise Within this past season.  If our production of Gem of the Ocean had an impact, then you must not miss Radio Golf!

Of course, December would not be the same without our critically-acclaimed production of Charles Dickens’ A Christmas Carol—and never was the world more in need of this greatest story of forgiveness, healing, and transformation.

In the spring, we bring you Mary Zimmerman’s most famous work, Metamorphoses. Set in a watery world of gods, goddesses, and hapless humans (the play literally takes place in a large pool of water), her re-animation of Ovid’s myths dramatically demonstrates how prophetic and relevant these ancient stories are.

Next up, An Iliad, Lisa Peterson and Denis O’Hare’s brilliant creation based on Homer’s The Iliad, a timeless story of war that resonates with tragic meaning—and brought to vivid life by one performer!

And finally, William Shakespeare’s most beloved comedy, A Midsummer Night’s Dream. This production will be created hand in hand with Metamorphoses and will share its watery world. We assure you—ours will be a Midsummer like you have NEVER seen.

Becoming a pass holder is especially vital to us at this moment in time. So, rise with us as together we heal, laugh, love, and continue to be inspired by the classics! 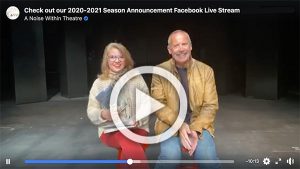 Crash through the looking glass with Alice on her zany adventure to an upside-down magical dreamland where imagination defies reality and madness makes logic. Weaving a whimsical poem of hilarious and colorful eccentrics, Lewis Carroll’s fractured fairy tale creates a prism through which we can again experience the mystery and effervescent wonder of growing up.

With a dash of depravity and a brilliant score, this Tony Award®-winning musical thriller shocks the senses with savage comedy, stunning terror, and razor-sharp wit. Savor the macabre madness as a murderous barber, hungry for revenge for his long-lost family, strikes a partnership with a beastly baker. It’s a tasty theatrical treat that will appall and enthrall even the stoutest of heart.

ANW’s exploration of Pulitzer Prize winner August Wilson’s American Century Cycle jumps from its first chronological play to the last as an African American mayoral candidate must confront ambition and tradition when the breakthrough of his career threatens his integrity and his hometown’s history. This Tony Award®-nominated play challenges the price of progress as a man navigates the cultural clash between his ancestral heritage and dreams of a better life.

Primal storytelling and modern sensibility collide in a sensual re-envisioning of Greek myths, as gods and mortals alike endure love, loss, and transformation—all while immersed in a pool of water on stage. Swirling with passion, Mary Zimmerman (author of ANW’s award-winning Argonautika) creates this Tony Award®-nominated masterpiece that mesmerizes with tales of Midas, Orpheus, Aphrodite, and more in a whimsical and heartbreaking meditation on the joys and perils of being human.

Based on Homer’s The Iliad, translated by Robert Fagles
Directed by Julia Rodriguez-Elliott

The lone witness of an ancient and ravaged Trojan battlefield weaves a tale of tragedy and triumph, with an enduring love for every victim of war. The Poet, an eternal being tasked with a passionate examination of deadly conflict, grapples with grief and dualities of victory and loss, power and fragility, heroism and hubris in an unforgettable modern take on Homer’s classic.

We promise—this will be a Midsummer like you have NEVER seen! Sharing the pool with Metamorphoses, the Bard’s most famous comedy makes an uproarious splash in a submerged swampland, where hapless mortals and squabbling sprites wade through mistaken identities, mayhem, and magic.