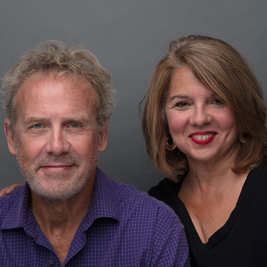 A Noise Within Producing Artistic Directors, Geoff Elliott and Julia Rodriguez-Elliott both hold a Bachelor of Fine Arts from the University of Florida and a Master of Fine Arts from San Francisco’s American Conservatory Theatre. In 1991, they set an ambitious vision for ANW: to establish a home for the classics that would present a challenging repertory, take artistic risks, and ensure accessibility to diverse audiences. Through their passion and persistence, the theatre now ranks as a leading presenter of great world drama in Southern California.

Under their leadership, ANW has received 26 Los Angeles Drama Critics Circle Awards—the most prestigious honor for excellence in theatre in Los Angeles; a Polly Warfield Award for Excellence; and the Margaret Harford Award for Distinguished Achievement. The Los Angeles Drama Critics Circle nominated its 2008 production of Charles Dickens’ Oliver Twist for “Best Production” and “Best Adaptation” and the 2009 production of Jean Anouilh’s The Rehearsal received three nominations for Ovation Awards, including “Best Production of a Play.” Productions are regularly listed as “Critic’s Choice” in the Los Angeles Times. In 2012, they were honored with the inaugural alumni “Contributions to the Field Award” by the American Conservatory Theatre (A.C.T.), which honors distinguished alumni and supporters who have contributed significant leadership in the field of theatre locally and nationally beyond their role as actors and founders. Fellow honorees were The William Randolph Hearst Foundation, Annette Bening, and Elizabeth Banks. Mr. Elliott & Ms. Rodriguez-Elliott have produced more than 120 productions, directed or co-directed more than 40, and have conducted a workshop over five consecutive years for the National Endowment for the Arts Journalism Institute in Theatre and Musical Theatre at the University of Southern California Annenberg School for Communication.

Mr. Elliott has performed major roles for some of the leading regional theatres in America, including The American Conservatory Theatre, South Coast Repertory, Arizona Theatre Company, Milwaukee Repertory Theatre, and California Shakespeare Festival. He has received three Los Angeles Drama Critics Circle awards and more than a dozen other awards for performance and direction.

Ms. Rodriguez-Elliott has extensive experience teaching theatre arts to students from middle school to college and regularly conducts student workshops as part of ANW’s educational programming. Ms. Rodriguez-Elliott has served on theatre panels for organizations such as the National Endowment for the Arts, Los Angeles County Arts Commission, and LA Stage Alliance, and she regularly lectures at the California Institute for the Arts, the American Academy of Dramatic Arts, and schools throughout the California State University and University of California school systems. Ms. Rodriguez-Elliott received the 2005 National Latina Business Women’s Association’s Latinas in Business Award in the Arts & Entertainment category, the 2006 Women in Business award from the California State Senate and Assembly, and the 2010 Fifty Fabulous Women of Influence in the San Gabriel Valley Award.